Flavescent Friday! It’s Friday - this week we released a fresh new Flavescent Friday shop with some fantastic gear! This year’s shop includes rares from the legendary Arthurian Vs Pirate war, Friday the 13th, and past springtime rares by the ever-awesome Charfade! The shop also contains an assortment of permanent  content at a deep discount, which should be fun to fight with! The sale will be on until Monday at 5pm EST, so be sure to snatch these bargains while you can. 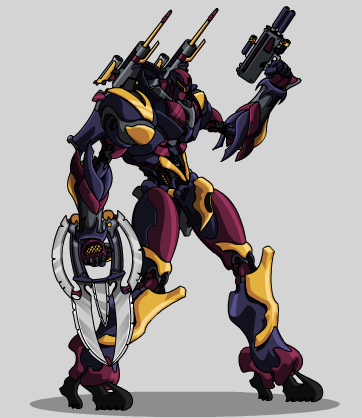 It's November! Such a busy time getting ready to bring you all sorts of holiday and non-holiday-but-long-promised goodness! I haven't had much time to write to you lately, and for now mainly I've got news for you from Plasma Charge and Practel. Plasma Charge has been doing some art & animation, and Practel is starting to learn about coding. Arklen, blues, Korin, minar, Vivi, and I have all been working quietly and busily on upcoming stuff as well. Anyhow, here's the news for the day! The actual Star Date on this first one is November 16, 3011

Incoming Transmission…A message to all mecha pilots, long time no see. I hope you’ve all had an excellent  Mogloween. New items!Head to HAL’s hair shop to check out another two new hairstyles, one for the guys and one for the girls! Bug Fixes!The Tyrano mecha series has had a fix made so it can walk around areas like Romero!The Romero sword fight Gremlin has finally been squished!
Gameplay Updates!The Cure Sys-Zero quest now has lower rolls to help new players progress. Also, Mae fixed some typos.You’ll also have a better chance to find one of the parts in Warlic’s Find Starship Parts quest.If you can think of other quests with tedious rolls please let us know here on the forums!

Howdy!
It's been a while since my last Design Notes! Don't worry, I'm still here and working on more than ever! This Wednesday the Mogloween event and maps will be going away once again for another year, however there will be the release of previous years Turkageddon! I've been working on a new Thanksgiving/Fall Soluna City, and here's a small sneak peek below!
http://cms.mechquest.com/mq/images/Turk2iizz13.png

"Nom nom nom"
I've also been working on the One-Eyed Doll CD weapon that will be coming out on Wednesday! This weapon is packed with sheer awesomeness, I love it!
http://cms.mechquest.com/mq/images/shredz2d3u3o.png
"I declare awesomeness and pew pew!"
Finally, good luck to all of you Heros who are finishing up school before Thanksgiving break! It seems like this is the time where teachers just want to slam you with tests and quizes, and believe me, that's not fun.
Stay safe and have a wonderful Thanksgiving,
Practel

Thanks, Practel! Happy Turkageddon, everyone! I'd like to take this opportunity to wish all of you American players a happy Thanksgiving as well. We are planning Flavescent Friday for November 30th this year. A special weapon coming to the holiday shop tomorrow will give you a hint as to one of the mecha models that will be in the FF shop.  What do you hope to see in the Flavescent Friday shop? Please let us know here!


SC only: For every equipped weapon, Mecha gets a BtH boost of 10, when all 5 are equipped, boost goes to 75.
And once agsin Real Life calls, this time Real Life is my mother.
Hope you guys have a lot of fun and you enjoy the new Frankie parts and MQ!
I´ll be back!