Happy Birthday, Korin!  To celebrate, pick up a Ketchup Cannon in the birthday shop in Soluna City Main. It's also the perfect date for this week's main release, which

Oh ha. Well I'll just let him do the talking!

Greetings! This week we have a somewhat larger release, at least it feels that way to me. Hah!

Tonight we have an addition to Planet 51. It's a series of fights that you can access after you've beaten the current 51, finished Yokai, AND finished Necryptos. Once you've done all that you can use the button that shows up on Korin's list.

This has several fights, most chosen by players when I asked, as well as one final fight that I came up with myself. It will take a little thought and strategy to beat a couple of them, but if you can it'll be worth it.

I also did some updates to the old Planet 51 rewards that you'll find in the Arm reward shop once you win. There's also some new stuff too that I came up with just for this. Some of the rewards are hints about something I'm cooking up personally and something in particular gives a hint at where the storyline is going next. You might have to talk to someone once you win to find out what that is though.

I hope you enjoy it and I'm very thankful to Mae for letting me go all crazy and do this. Make sure to let me know on the forums what you think of the fights and the rewards!

I'm quite thankful to Ash for all the hard work he put into this!

Here's a screenshot for you 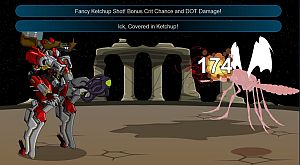 The Artix Entertainment team is offering a special deal for the month of June! If you buy Artix Points using a credit card, you will receive 10% bonus Points.

Just go to http://portal.battleon.com/store/points/ and select your preferred Points Package - then choose "Credit Card" as your payment method.

Update: The bonus applies to the following:

Having extra Artix Points on hand is always a Good Thing!

You can use your Artix Points to upgrade your MechQuest characters to Star Captain, or grab some Nova Gems which are useful for picking up extra storage slots and powerful battle equipment. Save up for a Holiday Rare mecha model coming July 4, or pick up some of those sweet seasonal rare weapons that cycle in and out of the shops - or even the ever-popular Sepulchure of Doom mecha from the Mysterious Stranger in Soluna City East.

We'll be bringing you some fun things to do on Friday the 13th - which is this Friday! Just a couple of days away!