The Traveler Gets a New Shipment!  A Star Captain Head complements the Ring shoulder series, and a Nova Gem and a non-Star Captain shoulder also arrive!

The non-Star Captain Flamethrower series: Does extra damage.  Good chance for an HP DoT - decent chance for an EP DoT as well.  Also has the potential to blind the enemy with a Bonus to Hit Nerf over Time (-10 per turn for 3 turns).

The 4th of July Mecha Models stay in the shop over this weekend! NG and SC get a buff! A lively discussion of the power level of the Deflagrator models is underway on the Balance Discussion Forums.  After some mid-week Staff discussion of your comments, we decided to buff the Star Captain and Nova Gem models a bit - the Star Captain models now have a chance to get what was previously the Nova Gem exclusive special, and the Nova Gem models have a greatly-increased chance of that special.  So we are keeping the shop open this weekend for you to pick up a Deflagrator.

Char is working on opening the wormhole... but... 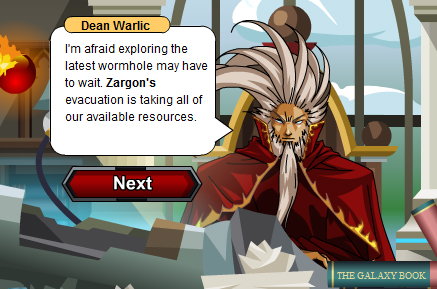 This is a sneak-peek from one of the upcoming cutscenes in the newest Wormhole chapter of the Dragonoid saga!  Lyris has been putting together some epic scenes and we are working on quests, enemies, and ... rewards!  Thyton is drawing up something amazing, and as this unfolds over the next few weeks we think you will be on the edge of your seat!

Minar, meanwhile, is working on an exciting top-secret project in his spare time, while keeping busy designing and animating weapons!  Awesome art, as always!

I guess that's it from me for now - I feel like I'm forgetting something I meant to tell you, other than to thank you - and I'll see you on the forums (and facebook, and formspring, and twitter...)