WHAT!? All six of Artix Entertainment's games are now under attack! Ebilcorp has sabatoged our 10th anniversary by unleashing millions of corrupted monsters into each of our games. According to the  video, unless we can defeat all of them by next friday... they will trigger "gameocide" and destroy our entire game network! 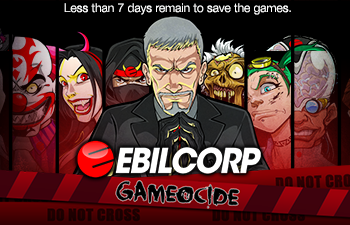 An epic battling spanning all 6 of our games

We are calling ALL players to help us defeat Ebilcorp and save the game network. Remember, this event is not happening in one game, it is spanning across ALL SIX of them.  Track the progress of each game’s war at www.Artix.com! Once your world is saved, help your fellow Heroes rescue their games! The war to save Artix Entertainment has begun.

Chairman Platinum, the leader of Ebilcorp says, "Artix Entertainment is now under the complete and indisputable control of EbilCorp. All gifts and presents pertaining to Artix Entertainment's 10th Anniversary have been confiscated and will be destroyed. Please leave all weapons and armors at designated EbilCorp destruction facilities. Under no circumstances are you allowed to confront The Chairman, who is overseeing the situation. Thank you for your cooperation and we hope your next Hostile Takeover is hosted by EbilCorp."