Alright! This week's release is kind of a lead-in to next week's Frida y the 13th event. I WAS going to release the cursed tape again as well but I think I'll just save that until next week as well. So for now, if you go to the New Release panel in Soluna City, you'll find a Pipe weapon in the Holiday shop that has to do with next week's release. It's a pilot weapon and in ANY survival horror game, the rusty pipe is ALWAYS your best friend.

Then there's Gameshow Planet. Holy cow, things are coming together. I've got the town files all setup, I'm working my way through all the obstacle course stages and you players are helping me greatly with trivia questions for the Gameshow planet, and I need lots. So be sure to add lots of questions. If one of your questions gets used in the game, a character ID of your choice will get 100NGs. It couldn't be simpler! But seriously, the Gameshow planet is really coming up and I think the realistic deadline will be the week after Friday the 13th. I think it's a very realistic goal thanks to Maegwyn leading the Friday the 13th project with Vivi, Lyris, and Minar. I sent the next SC mech to Arklen to be vectorized, shaded, colored, and animated. That's right. A star captain mech is ALREADY in production. Seriously it's like we're severely getting on track here. It's almost scary.

In other news, EpicDuel has released a new poster in HeroMart! You can pick yours up at http://heromart.com/ and you can also go the extra mile and get a copy that was signed by the EpicDuel team(Titan, Nightwraith, and Charfade) 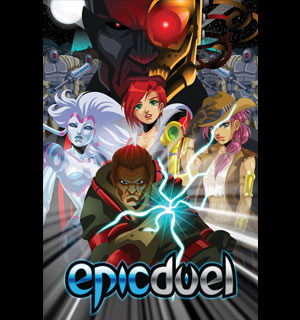 As for Friday the 13th, from what I've seen and heard, it sounds like it's going to be another great year! I saw the intro cutscene and it cracked me up. I'm excited to see the final quest next week when Mae and team finishes it. After Gameshow planet we can start working towards this new workflow of MQ which will include one more big hurrah for how we do things now before we can make things fuller and more streamlined, and hopefully as hinted, allow you to play as a Shadowscythe.

I'll leave you with that for now. Lots of things to look out for in the very near future. Have a great weekend and talk to you later!