Bug Reports And You

Today we need to go over something important. It's so important I'm devoting a whole DN post about it because it needs to be covered. How to report a bug.

First off. Clear your Browser Cache! Flash uses a caching system. That means your computer saves old info so it loads things faster. If we rolled a fix to a bug and your cache still has the old info you WILL NOT get the fix! You should try and clear your cache at least once a month, but if you're reporting a bug clear your cache first, THEN try to get the bug to happen again. If it doesn't that means we most likely fixed it. If it does still happen then yes you should report it. To figure out how to clear the cache of the browser you're using a quick google search will show you how!

Now, if you've cleared your cache and the bug is still happening that's when you should report it. 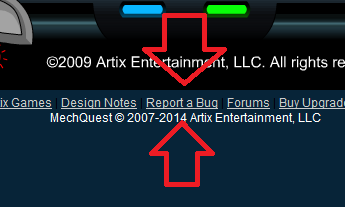 Greetings! Tonight we have a release for Star Captain's! The SCEM Mohawk is now back in permanent form with new specials in the Star Captain Armory! (The armory is in the Star Captain Club in Soluna) This is a offensive focused mecha, but it lacks a bit of accuracy to make up for that so you should probably train ACC and POW to get the most out of it!

The Father's Day shop and Summer Quest will be leaving on Monday so you have this weekened to grab the items if you still want them!

The team is also working on a few other things that we're hoping to release really soon. They're really cool and while not a main storyline release, will be fun things to do overall and hopefully you all will like them! We're also trying to get Liath and a few other main storyline things done but due to the team size it's a lot harder to pull everything together. We are trying though!

I'll be back with another DN on Monday with some info on a few things so check back then!

It's that time of year! School is out for summer vacation! After the busy year you've had it's finally time to kick back, relax, and have some fun at the beach! Lagos has some of the best in the quadrant and there are plenty of small islands that will let you have some much needed peace and quiet. Just watch out for any pirates that might be lingering around. The new button in Soluna Main will take you right to the quest.

Check back on Sunday for the Father's Day shop!

Have a good weekend and I hope everyone is having a great summer!

Retro Arcade Game Made in a Day

If you thought Flappy Bird was hard, you gotta try this app. It is hard, retro, hard, simple and super hard. Lasting 10 seconds pretty much means you are a gaming god. Tell you what. Get over 1,000 points and the entire internet will bow down before you claiming you are the ultimate gaming god of the universe.

Greetings! This week we have more of a Quality of Play update than anything else. (It took a while to get everything setup right!)

First off the Mission Log button recieved a few changes. The "news" button has been changed to "Info". If you click that you'll find that there is now just a "Story Guide" button and the Golden Mecha gift shop. The story guide button has been updated to cover all the main storylines. This means that once you finish with the Soluna Jobs, like Mecharoni and the Museum, you can use this button to find out where you should be going next. It'll walk you through the main storyline all the way up to the March of the Shadowscythe and the new storyline quest. If you click one of those sub headings it'll give you some text as well as a button to head to the hub of wherever you need to go. This should help a lot of you out as many times it can get confusing as to where you should be going to follow the storyline.

The other update for today is that the Experience To Next Level has been adjusted. I know I mentioned this before but it's been put into place. You'll now level up a bit faster and you should have less of a grind. If you're following the main storyline, and doing side missions as you find them on the various planets and as we release them, you should find less of a "I'm stuck" feeling. This isn't meant to make you level to 50 in 2 weeks. This is just meant to help you progress through the storyline and feel like you're actually progressing.

Along with this, because you are leveling faster, I upped the credit rewards game wide. This should make it so you'll get the same ratio of credits earned that you did before the change so you can replace items and get new mecha at the same rate you were. These changes should help, along with the overall tweaks and changes we'll make continuing in the future of overly difficult content, to make the game easier to get into for newer players, better for returning players, and helpful to current players if they want to level a new character or progress farther on a current character.

I hope this helps many of you out there as I know quite a few of you have sent me messages over the past few months asking about several of these things. I'm sorry we weren't able to have a quest or item to go along with this but with how much work it took to get everything pathed out correctly and linked and tested along with all the time I spent trying to get the TNL Exp to work out properly there just wasn't enough time to do anything else. We will have a quest next week though!

Greetings! This week we have a quest on Zargon! The scientist's there are trying to find a way to return their powers. (You can only use those suits for so long before you miss your old abilities!) Something has gone wrong though and Selina has requested your help. If you can figure out what's wrong, two new Mecha based on The Increadible Bulk and Thunderhammer await you!

You can access this new quest from Soluna Main. It'll get moved to Zargon next week as I ran late trying to get the enemies and mecha's working. Tek's quest will also be moved out of Soluna Main and into her shop at that time. The rewards are un-equippable models but you have full control over which attacks to use so that should lessen the randomness and let you plan out use of the effects a bit more.

Enjoy the quest and let me know on the forums what you think!