A Behind the Scenes on Testing in MechQuest

Hiya Questers!
Today I figured I would walk you down the road of testing a weapon in MechQuest. Something awesome about MechQuest weapons is that each weapon is unique in its own way. Every weapon has a different special, different art, and different effect! Since each weapon is so unique, every weapon must be tested individually to make sure that everything is working. You can't just equip the weapon, say "This weapon looks good" and then release it because there are a LOT of bugs that come up!

For instance, I just finished a weapon this morning that is releasing later today. I would say I have 9-15 different versions of this weapon, each with little buggies. For this weapon, there are 17 different things that the team and I had to test. The beautiful thing about testing is that you can locate and pinpoint the bug, and then attempt to fix it. In the list of things the team and I had to test, we went down the list one by one, checking off the things that worked and noting the things that didn't. What happened a lot during this process was finding one bug, fixing it, doing a miniature celebration, then find another bug. Rinse and repeat.

Last night when I was working on the weapon a rather annoying bug occured. I have since dubbed it the name "Bug of Staying up Late!". Last night, with only one thing to test, a bug that literally defied the logic of math worked its way into the weapon. The bug was: 5 * -7 = 40. Which is false. 5 * -7 SHOULD equal -35. Why was this happening? I reviewed the code with Maegwyn and Vivi about 5-10 times over, and we still couldn't figure out why it was occuring. We decided to call it a night and tackle it in the morning.

Boom, 10:30AM and the bug was never a bug. The enemy had an inherent -5 boost, and the -35 was just being added to that. So in all, the code was right, and it's just I never realized the enemy had -5 to begin with. It's safe to say the game trolled me.

Well, that's it from me this week. I hope you enjoy the weapon coming tonight! It's called the "Valoth's Epic Shredder" series. 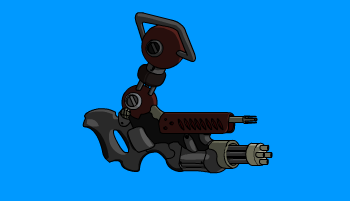 The specials are attached below :)